these are the voyages of the royal princess 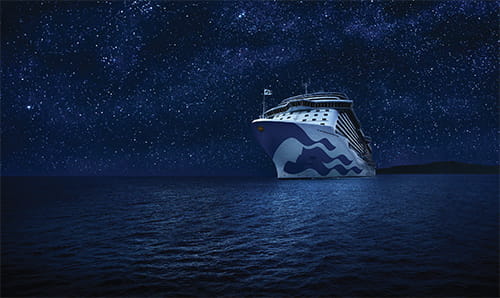 My first experience with cruising was watching The Love Boat on television. As a child, I was enthralled with the glitz, the glamour and, yes, the romance. I still know the theme song by heart. Seeing the iconic Pacific Princess ship in exotic destinations on my TV screen every week was like an all-access ticket to the world. My love for travel is tied directly to my memories of The Love Boat, while my love of technology was inspired by watching Buck Rogers, Battlestar Galactica and Star Trek.

When I heard that Princess Cruises was launching Princess MedallionClass Vacations on my recent Alaska cruise aboard the Royal Princess, I was thrilled because it unites my twin passions of travel and technology. The Royal Princess was refurbished in December 2018 and holds 3,600 passengers. This was my first time visiting Alaska and my first weeklong cruise on Princess Cruises. 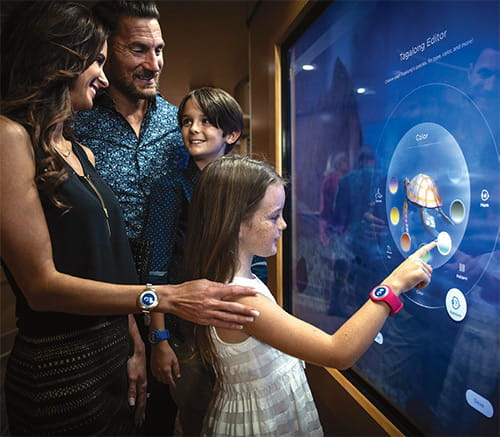 MedallionClass Vacations debuted in February 2019 on the Caribbean Princess and the Regal Princess with plans to roll out the program to all ships in the Princess fleet. Princess MedallionClass Vacations feature the complimentary OceanMedallion. Available to anyone who books a cruise on select Princess ships, the OceanMedallion is a wearable device that allows you to breeze through check-in, unlock the door of your stateroom simply by walking up to it, and more. You can also order a drink from the OceanNow app on your smartphone, and crewmembers deliver the drink to you wherever you are on the ship. It’s the next-best thing to a Star Trek replicator.

The OceanMedallion is small, about the size of a quarter. It can be inserted into an included lanyard, or you can purchase accessories such as gold or silver wristbands, necklaces, etc. onboard the ship or online at Ocean.com. When you complete your profile in the OceanReady app, you can have the OceanMedallion mailed to you (provided you live in the U.S.). Even opening the package when it arrived at my door was an experience. I’ve never been the type of person who watches “un-boxing” videos on YouTube, but the sleek and modern packaging that the OceanMedallion comes in made me want to start filming. 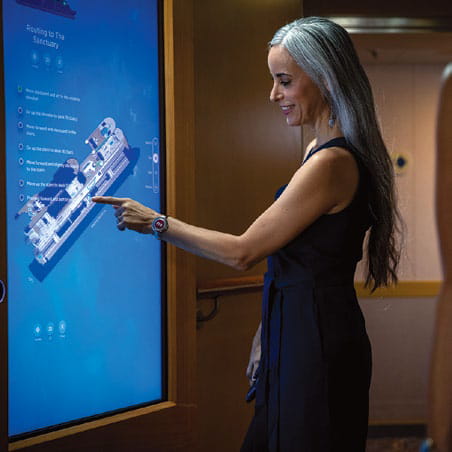 Using the OceanMedallion to get through embarkation was quick and easy. My husband and I had uploaded all our travel documents to the OceanReady app, so we just walked up to the counter and had our OceanMedallions scanned. Then we were ready to go through customs since we were U.S. citizens boarding in Vancouver, British Columbia. After my husband and I made it through customs and boarded the ship, we dropped our carry-on bags in the stateroom. We both connected to the MedallionNet Wi-Fi, and then we went to do a little exploring before the emergency lifeboat drill. I always want to get through the lifeboat drill as quickly as possible, but hearing the instructions set to The Love Boat theme song made the drill more fun. OceanCompass, the ship navigation app that can be accessed on your smart device or via portals throughout the ship, made it nearly impossible to get lost, but I’m an overachiever. On our way back to our stateroom, I directed us into a few dead ends (I meant to goright, but I told my husband to go left and hijinks ensued) before my husband took over by visiting a nearby portal to get us back on track. After that, he downloaded the OceanCompass app on his smartphone. 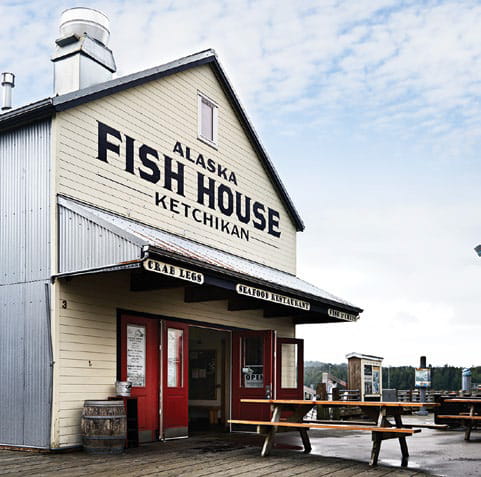 Our first port of call was Ketchikan. We ate breakfast in the Horizon Bistro and then made our way to disembark. The lines were manageable, and thanks to the OceanMedallion, it was a snap to get off the ship. We just walked up to the kiosk, tapped our medallions to the scanner and left. We explored the quaint streets and shops of Ketchikan near the ship, and then we wandered over to Creek Street, the former red-light district that’s now a historic boardwalk hosting a museum in a former bordello plus locally owned stores and art galleries. Another must-see is the Great Alaskan Lumberjack Show, an optional excursion in which lumberjacks compete and tell jokes, with audience participation encouraged.

Our second port of call was Juneau, the capital of Alaska. My husband and I really wanted to see sled dogs, so we took the excursion to a summertime training camp in the mountainside just outside Juneau. We were introduced to our sled dog team and got to experience being pulled by the dogs in a wheeled sled. Contrary to popular belief, most sled dogs are not Alaskan Huskies. The dogs were all very sweet and so excited to run. They were barking and jumping as soon as they were harnessed. Afterward, we visited with the puppies, and it was difficult to resist sneaking one out in my backpack.

No trip to Juneau would be complete without a stop at the Red Dog Saloon. The waitresses are sassy, the drinks are delicious (try a duck fart, which sounds awful but consists of Kahlúa, Baileys Irish Cream and Crown Royal whisky), and the music (with slightly naughty lyrics) is lively. The Mount Roberts Tramway, a cable car that whisks you to the top of Mount Roberts, offers amazing views of Juneau and the surrounding area, if the weather cooperates. 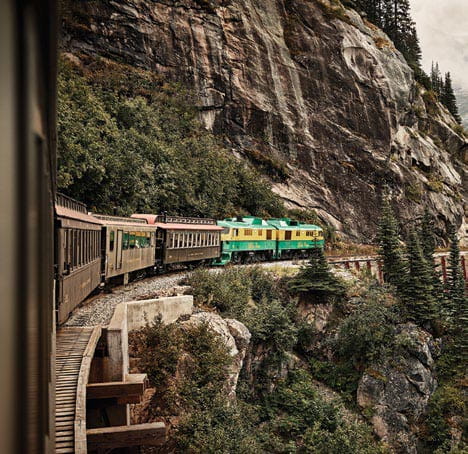 The population in Skagway, our third and final port, doubles during the tourist season of May through September. It’s also the home of the White Pass and Yukon Route Railroad, started in 1898. My husband loves trains, so as a special treat, we splurged on the luxury-class excursion, which was my favorite excursion on the trip. Stepping aboard the vintage passenger coach felt as if we were stepping into the golden age of train travel. We relaxed in comfy chairs and enjoyed soft drinks and adult beverages with appetizers and sandwiches while listening to tales of the Gold Rush as we climbed the Boundary Ranges of the Coast Mountains. During the roughly two-and-a-half-hour ride, our host pointed out interesting sites such as Dead Horse Gulch and the original Klondike Trail, explained the history of the area and alerted us to upcoming photo opportunities (think the Bridal Veil Falls) so that we could get our phones and cameras ready. Our car was the caboose, so we had unobstructed views of the landscape behind us. Several times I took advantage of the balcony off the back to snap photos.

Where No One Has Gone Before
I was excited for our at-sea days to really test out the OceanNow app. After breakfast on our first at-sea day, we found a spot on the pool deck to watch the glaciers in Glacier Bay go by and sip mocktails delivered via the app. Our beverage of choice was the piña colada. The scenery was gorgeous, but the decks started to get crowded. I’m short, so seeing over people isn’t an option. We went back to our stateroom and enjoyed our drinks out on the balcony. Helpful hint: In Glacier Bay, the captain spins the ship in a slow circle so that everyone can get a view of the Margerie Glacier, a 21-mile-long tidewater glacier that is a UNESCO World Heritage site. If you have a balcony, use it. It’s probably the best way to avoid the crowds and get great pictures. 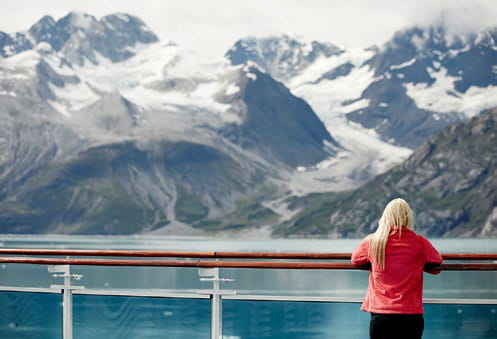 As we departed Glacier Bay, we decided a late lunch was in order. We ate and played a few games on the PlayOcean app while mapping out our plans for the evening.

After lunch, I bought gelato without even pulling out my phone or my OceanMedallion. The tablet at the store counter recognized me by reading my OceanMedallion. I was greeted by name, and my order was delivered to my table. It was a neat experience that made me feel as if I were in a sci-fi TV show. Speaking of shows, the OceanView app has some interesting travel documentaries available, such as Ocean Treks with Jeff Corwin, which featured several episodes on different ports in Alaska. You can stream shows to your tablet as well as watch them OnDemand on the TV in your stateroom.

The Royal Princess is a lovely ship, but introducing Princess MedallionClass to the ship made it even better. Having keyless entry to our stateroom and food and drinks delivered on demand is my kind of vacation. The OceanMedallion helped me to spend more time with my husband enjoying all that Alaska had to offer without worrying about the logistics of the trip. The reason I love technology is how it makes our lives easier so that we can focus on the moments that matter. And that’s what Princess MedallionClass does.