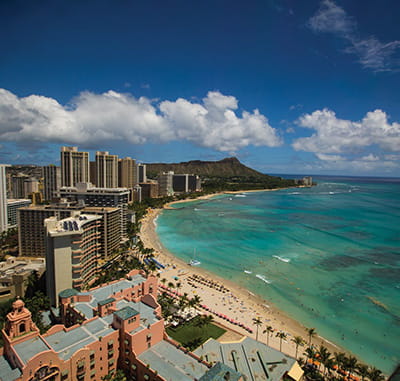 As our sightseeing helicopter swung around a bend on Kauai’s Napali Coast, my mouth fell open. Our pilot, Miguel, said all the waterfalls were pumping just for us. The result of several days of cool rain, no fewer than a dozen waterfalls cascaded down 3,000-foot cliffs. Later, the low-hanging clouds drifted from the mountaintops as if on cue, so we six passengers also got an eyeful of 5,148-foot Mount Waialeale, the wettest spot on Earth at 450 inches of rain per year.

The hourlong helicopter fight was the highlight of my February trip, but it wasn’t the only stellar moment on Trafalgar’s 13-day Hawaii Four-Island Adventure.

I’d been waiting years to visit Hawaii, and I wanted to see as much as I could on my vacation. So, visiting Oahu, Hawaii (a.k.a. The Big Island), Maui and Kauai with Trafalgar was the perfect solution. Scheduling a guided vacation means there’s minimal hassle and maximum enjoyment. Not only do the folks at Trafalgar handle the travel arrangements, including top-notch accommodations and transportation, but they also take care of time-consuming details such as ticket purchases and reserved seating. And this tour’s itinerary has the ideal blend of group exploration and free time—providing at least an entire free day (usually more) on every island.

A good guide can make or break a visit, and Trafalgar never disappoints when it comes to local experts. Our group of 33 travelers was escorted by Travel Director Michael Murakami, who kept the group informed, organized, on time and hugely entertained. He packed our heads full of Hawaiian facts, culture, legend, tradition and history wherever we went. I felt as if I were visiting another country when I tried to wrap my tongue around the Hawaiian place-names, but that’s part of the fun. 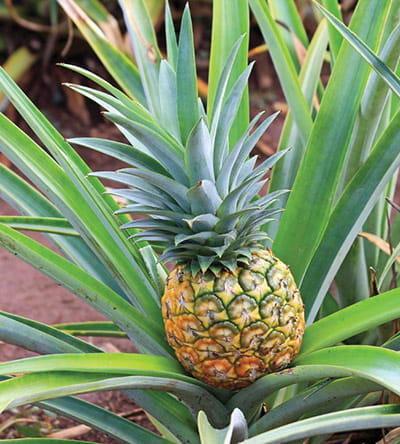 The trip kicks off in Oahu, the most populated and urban of the islands. Honolulu, Hawaii’s bustling capital, is the state’s modern heart. Guided time on Oahu took us around the island’s perimeter, where we stopped at the Dole Pineapple Plantation, the North Shore’s Sunset Beach on Waimea Bay and the Polynesian Cultural Center (PCC), which offers an extended excursion to its individual villages. “Hawaiian” is not a race but a nationality, and the PCC teaches about the South Pacific Island peoples who settled the islands.

We finished the outing with an impromptu stop at the family-owned Tropical Farms Macadamia Nut Farm, which offers specialty coffee, local art, and, of course, myriad macadamias in manners plain, spiced and dipped.

Another partial day of guided exploration took us to downtown Honolulu, where we strolled through the unique dome-less capitol’s open-air entry (“The sky is our dome,” says Murakami) and were introduced to a bronze of Hawaii’s only queen and last ruler—Queen Liliuokalani—before meandering beside the royal palace and King Kamehameha I’s elaborate statue across the street. A visit to Pearl Harbor afterward allowed us to visit the USS Bowfin submarine, browse the grounds and two exhibit halls, and view the 23-minute film on the attack. A harbor ride following the film allowed only views of the USS Arizona Memorial because of pending bridge repair at the dock.

Our Oahu hotel, Outrigger Waikiki Beach Resort, was perfectly located. We had movie-star views of iconic Diamond Head volcano and dramatic sunsets along with a slice of golden sand and the trip’s best breakfast, courtesy of an eclectic menu at Hula Grill. The hotel’s location also put us smack-dab in the middle of numerous off-site eateries—some casual, some upscale—and shops ranging from Balenciaga and Christian Louboutin to Valentino and Harry Winston. Plus, we had free access to a local trolley that ferried us to everything from Diamond Head’s trailhead—where a half-mile hike leads to expansive views of the island below—to the shopping mall. 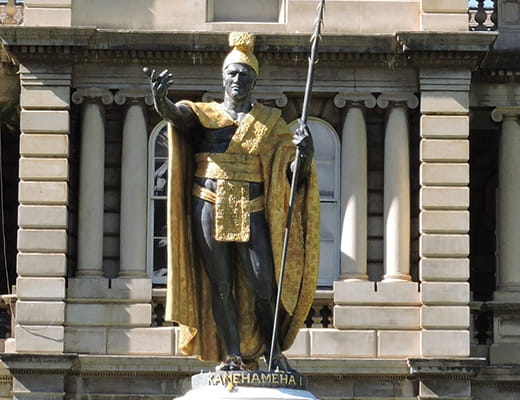 Kings’ Hangout on Hawaii
The Big Island is Hawaii’s largest island at just more than 4,000 square miles, and it’s where we began our journey through the less urban, more nature-centric islands. The powerful Kamehameha I, who was responsible for unifying the Hawaiian Islands by 1810, was born here, and it’s where he spent his last days as well. The Sheraton Kona, where we stayed on the island, sits shoreside at Keauhou Bay, King Kamehameha III’s birthplace.

The Sheraton is also home to the Manta Ray Learning Center, where we learned about the bay’s 250 resident manta rays. The largest one, Big Bertha, weighs 1,500 pounds. The adventurous can snorkel with the animals after dark. I opted out because of the water temperature (and the rays are a little scary looking); however, the hotel aims spotlights at the water near its oceanfront restaurant, Ray’s on the Bay, which draws into view many mantas diving for krill.

A free Sheraton trolley facilitates a visit to Historic Kailua Village for shopping and casual restaurants or access to a spot of white-sand beach. Our group also stopped at Kona Joe’s Coffee Plantation, which overlooks the Pacific Ocean, to learn about the state’s top trending export. The samples were terrific, as was the lesson on organic coffee growing, harvest and production led by Ecuadoran intern/guide Carlos.

The Big Island is home to five active volcanoes—Kilauea, Mauna Loa, Mauna Kea (the world’s tallest at 13,800-plus feet), Kohala and Hualalai—and the country’s first national park set on an American territory, Hawai‘i Volcanoes National Park, established in 1916. A lengthy drive from the hotel to the park allowed us to stop at the country’s southernmost bakery, Punaluu Bake Shop, for a malasada (think sugar doughnuts) and the Punaluu Black Sand Beach to look for green sea turtles. Murakami also told us engaging stories about island wildlife, Captain Cook’s tumultuous visit and death in 1778–79, and Pele, the revered Goddess of Fire.

Hawaii’s volcanoes are shield volcanoes, meaning they don’t actually “explode” catastrophically; they split open in fissures that ooze lava, which can travel at up to 25 miles per hour. Because of Kilauea’s 2018 eruptions—which added 700 acres to the island—and a tight schedule, we were restricted to stops at the visitor center and Kilauea’s caldera, crater and sulfurous steam vents. A helicopter flight over the affected area was a pricey optional excursion, which I opted not to take.

All of the Hawaiian Islands once held extensive sugar plantations, but rising production costs were insurmountable; the last sugar plantation closed in 2016. That land is being reclaimed for a variety of purposes, including burgeoning coffee plantations and tourism. But tourists aren’t the only travelers here. Maui, known for stunning natural attractions such as the Road to Hana and 10,023-foot Haleakalā volcano, is also a popular gathering spot for many of the 5,000 humpback whales that migrate from Alaska every winter to give birth, mate and play in the warmer water. Maui’s Pacific Whale Foundation celebrates their visit every February with activities such as a film festival, toy whale regatta, concert cruises and the Great Whale Count.

Kaanapali Beach is a great place to spy whales breaching in the distance, and the elegant Hyatt Regency Maui (our accommodations) has a prime spot beachside. Its Swan Court, where tables are snug around a duck- and swan-filled pond, was undoubtedly the trip’s loveliest breakfast setting. An optional whale-watching boat tour was a Maui must-do experience. Unfortunately, we “back-of-the-boaters” missed the best action, the National Geographic magazine-cover-worthy baby-whale breach at the bow. Fortunately, 5,000 whales mean sightings are plentiful anyway. And when a hydrophone was lowered, we all heard the “whale song,” a message made only by males and understood by all Pacific humpbacks. Magic.

Back at the marina, a stroll through laid-back Old Lahaina was on tap. Lahaina was Hawaii’s first capital, from 1802 to roughly 1852, and a major whaling port. Historic buildings house art galleries, shops and restaurants, from the classic Kimo’s to (Mick) Fleetwood’s on Front Street and the first Cheeseburger in Paradise. Photo ops include one of the world’s largest banyan trees next to the harbor; it’s a stunner. It covers nearly 2 acres, is 60 feet tall and has 16 trunks; it looks like a grove of trees, but it’s all one tree. The group next made a stop at the 21-year-old Maui Ocean Center, a respectful haven for marine life such as tropical fish, green sea turtles and 20 sharks of five species, which visit the 750,000-gallon Open Ocean exhibit tank for 6 to 10 months before being released.

Lunch was a Trafalgar signature meal called Connect with the Locals, which entailed a delicious visit to Oo Farm, a third of the way up dormant Haleakalā. The brainstorm of two French Canadian fishing buddies, Oo Farm is an eight-and-a-half-acre organic endeavor. We learned about the farm’s practices after indulging in such sumptuous items as homegrown fruit, coffee and lemon/thyme-infused tea, rustic bread, fresh-caught mahi-mahi, and beets, greens and purple cauliflower picked that morning. Our hosts not only served us but also grew the food. It was a delightful al fresco farm-to-farm-table event.

The Drums of the Pacific luau at the Hyatt that night made us members of the ohana (family) in the true aloha spirit. 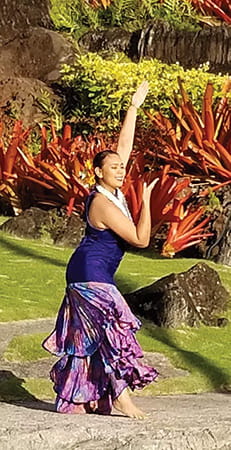 Kicking Back on Kauai
The Coconut Tree Ordinance is indicative of life on Kauai, known as the Garden Island. It means that no structure can be taller than a coconut tree, or four stories, which limits commercial growth. Because it’s the oldest, least populated and most laid-back island, it was also the just-right ending to my Trafalgar journey. Free time on Kauai included the opportunity to relax and enjoy the intimate and tasteful Aqua Kauai Beach Resort’s four pools, spa, beachfront and idyllic grounds.

Group time included a visit to the Grove Farm Sugar Plantation historic site. A guided walk through the 1836 preserved property took us to laundress Kikunyo Moriwaki’s simple cottage, founder George Norton Wilcox’s austere private cottage, and the renovated-to-1950s family home, including a library boasting the island’s largest book collection. In the kitchen, cook Paula Rosa served us mint tea and sugar cookies made in the 1904 woodstove before bidding us farewell and saying, “Be good, be nice and behave.”

A rainy switchback drive to the overlook at Waimea Canyon—The Grand Canyon of the Pacific—preceded a short trek awash in slick red mud for a disappointing peek at the famous chasm. Nevertheless, the helicopter ride the following morning more than compensated with panoramic views of the coast and the canyon. I still smile when thinking about it.

Planning Your Trip
For information on this tour or other travel itineraries with Trafalgar, visit AAA.com/Trafalgar or ask your AAA travel agent.